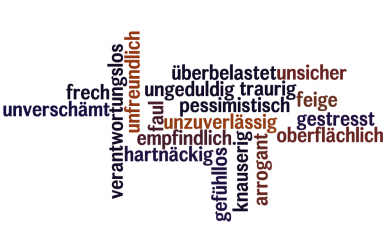 Sometimes you just can’t seem to find the right word, which is why we’ve compiled lists of them for you! Each category contains over 100 German adjectives along with the English translation, and every list is available to download as a PDF file for home and school use.

Remember that when a German adjective comes before a noun, it is influenced by the gender of the noun, the case, and by any prepositions that may come before it. This means that the adjective is often declined when used in a sentence:

“stark” —-> “er hat starke Hände” [“Hände” is a plural noun with no article, and must be in the accusative case since it is the object of the sentence. Therefore the adjective ending is “e”].

“stark” —-> “mit starken Händen” [“mit” takes the dative case and “Hände” is a plural noun with no article, therefore the adjective ending is “en” and the noun also gets an “n” because it ends with a vowel].

“stark” —-> “der Mann ist stark” [when the adjective comes after the noun, no changes are made].

A detailed explanation on this topic can be found in our German Cases & Adjectives section, where you can learn how to decline German adjectives according to the nominative, accusative, genitive, and dative cases.

This section is one of our newest features, so bear with us as we set things up and add new content! For questions, comments & suggestions, chat to us on Twitter or Facebook.